As the year is drawing to an end, let’s take time to remember all the movies which made you cringe and (almost) leave the theater. Without further ado, I present you this year’s the bold and the ugly. END_OF_DOCUMENT_TOKEN_TO_BE_REPLACED

You all recognize him from Man of Steel (2013) as the newest Superman, but what more do you know about this talented and handsome actor? Did you know that his dream role is to play Alexander the Great for instance? And were you aware of him being Stephenie Meyer’s first choice for portraying Edward Cullen in the Twilight Saga movies? I guess it’s a good thing he was a bit too old for that one. END_OF_DOCUMENT_TOKEN_TO_BE_REPLACED

The Host proves to be suitable for the hardcore Twilight fans, but lacks so many things that I’ll doubt even they will find it an enjoyable spectacle. END_OF_DOCUMENT_TOKEN_TO_BE_REPLACED

I have to be honest: I did not fall asleep during the final, concluding chapter of The Twilight Saga. But then, I was already busy writing this. This is not an ‘epic’ movie, but I liked it because it made me laugh. It’s so funny how a movie like this has become the number 1 of many teenagers and even somewhat older women across the globe. There are so many elements I’d like to talk about (actually each second there was something interesting going on), but let’s (try to) look at it from a more balanced perspective, shall we?

A phenomenon in 2008, The Twilight Saga soon became your ultimate destiny to dream away. Whether you liked Lautner’s six-pack abs, or Robert Pattinson’s romantic moments or even Kristen Stewart’s inability to express herself: this Saga had it all. Except…this final part.

Breaking Dawn Part 2 could be considered as the least romantic part in the entire saga. Edward and Bella’s semi-vampire child, Renesmee, grows up rapidly but the Volturi, the first vampires ever, see it as not-done. The child must die. So: it’s time for some war. The Cullens can’t allow this, obviously. They start recruiting vampire families willing to save the child. Some of Jacob’s pack even joins. It is one happy family.

On the other hand, romance is not what makes Part 2 so much better than earlier movies in the Saga. It’s all about the villain of the story. Unlike the previous parts, the producers have only tried to focus on the clear threat the Volturi pose. The confrontation between the Cullens and the Volturi has been portrayed exceptionally well. Comparing it to the Cullens versus baby vamps confrontation in the previous movie, this is a godly piece of art. Legendary even.

That makes me happy. To see how the Saga has developed over the years. And though this final part isn’t the best movie ever (it has too many flaws to be called such — especially the terrible ending), it contains the necessary elements to be labelled ‘good after all (these years)’. 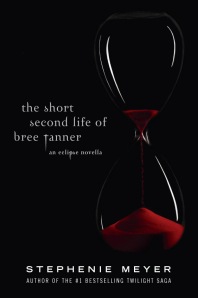 Stephenie Meyer is the author of the No.1 bestselling Twilight Saga. She graduated from Brigham Young University with a degree in English literature, and she lives with her husband and three young sons in Arizona.

To clarify the title of this Eclipse novella we need to look at three very important words. These are: ‘short second life’. So we know that the story of this ‘Bree Tanner’ isn’t going to last very long. We also know that this is her second life; meaning she’s turned to be a vampire. In Eclipse we already met Bree but we hadn’t read her story. This is our chance to do so.

The story is mostly set in the outskirts of Seattle. It covers a period of approximately two weeks. The setting has a big contribution to the story and is linked to the characters. Vampires cannot stay in residential areas; nor do newborn vampires. That is why they stay in the outskirts so they won’t draw much attention to humans.

There are different types of characters in this book. Bree is of course the most important character but Diego has also an interesting part in the story.

Bree is a small, blonde girl who comes from the poor and dangerous areas of Seattle. Her mother dead and her father was an alcoholic who beat her most of the time. One night she meets Riley and it turns out to be that he is a vampire. In Eclipse, Bree is such a small seemingly trivial character. She lives for only five minutes of Bella’s perspectives. And yet her story is so important to an understanding of the novel. It is the first time we (as readers) step into the shoes of a ‘real’ vampire – a hunter, a monster. We get to look through her red eyes at us humans. We get to feel what it would be like to be surrounded by enemies, always on guard, never sure of anything. And that’s what it makes Bree so important as a character. She is a small girl that accidentally has come into a dark world full of surprises and lies.

Diego is eight months older as a vampire than Bree and two years older in human form. He lived together with his little brother in the slums of Seattle. When his brother is killed by a gang, he wants to take revenge. After having done some damage he is confronted with the whole gang. Riley helps him and changes him as well into a vampire. Diego meets Bree and they become good friends in a place where there are only enemies. Diego has a very clear function in the story: symbolizing humanity.

The short second life of Bree Tanner is told from the first person narrator. So we see and hear through Bree. The sentence structure in this story isn’t very complicated. Short sentences are used with varied and easy vocabulary. The sentences aren’t very descriptive; mostly thoughts. The sentences are written in an informal style.

The main theme of this book is friendship and the use and abuse of that. Who you can trust and who you can’t. Who truly is your friend and who isn’t. Who lies to you and who doesn’t.

I enjoyed reading this book. It was very intriguing to read from Bree’s perspective rather than the usual. In Eclipse when Bella was staring at Bree I already wondered what had brought her to that point of time. Reading from Bree her point of view made all this clear.

Finally this story isn’t like the usual Edward and Bella romance, but it’s a lot more. We as readers already know Bree will die (be killed), so the whole point of the story is to come to know the details of the last weeks of her second life. Recommended to all ages.